At border control between Ukraine and Poland our train stops for two hours.

An official opens our bags, another one takes away our passports. Someone else comes back to check our bags for cigarettes and vodka. A woman returns with our passports. We wait. The train moans and puffs. It’s 4am. But there’s an hour time change. So is it 3am? Who knows. We get moving again. Just when I’m about to fall into a deep, comfortable sleep… we arrive in Krakow. 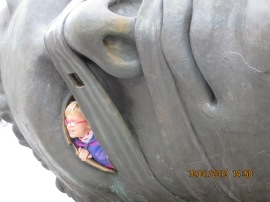 Krakow, where modern and historical mix.

We stumble into our hotel and when we wake up a couple of hours later the Poland surprises begin. These surprises have names. First in Krakow they are Gosia, Andrzej, Slawek and Jakub. Then in Auschwitz there’s Michael. In Tarnobrezg there’s Irena. Finally, in Warsaw there’s Pawel.

Gosia is our guide in Krakow. She is 30 years old, an educator for the Żydowskie Muzeum Galicja, and specializes in Jewish Krakow. She is not Jewish. After living in a small Polish town and walking by an abandoned Jewish cemetery on her way to school every day while growing up, she began asking questions. When she didn’t get answers she decided to earn a degree in Jewish Studies. “It’s part of our heritage, our culture,” she explains. 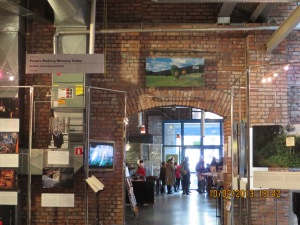 Jakub, the young director of the Zydowskie Muzeum Galicja, has a similar story. He grew up surrounded by fragments of old synagogues and Jewish cemeteries in Kazimierz, Krakow’s Jewish district.

Gosia and Jakub are part of a movement in Poland that’s breaking the silence that’s been a part of the country’s makeup since World War II. It’s not just the Jewish survivors who didn’t want to linger on the past, it was Polish survivors, too. Often because of guilt, sometimes for fear of losing property that once belonged to Jews, explains Pawel, our guide in Warsaw. A new generation has decided to not only ask questions but dedicate themselves to vocalizing their stories. 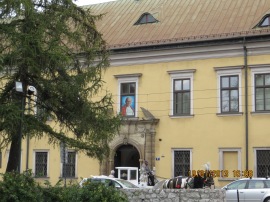 Window in Krakow’s Bishops Palace, where Pope John Paul II addressed the people, encouraging freedom from totalitarian government and a positive relationship between Jews and Christians.

Our visit to Auschwitz is somber as expected. But we meet Michael, an Austrian who is not Jewish but decided to learn and educate visitors about Jewish life in Auschwitz before the war.

The following day we drive to Tarnobrzeg with Andrzej and Slawek. Neither is Jewish. We find an old synagogue that’s been converted into a library. Tarnobrzeg was 67% Jewish before World War II. Today there are no Jews left. Before we take off on our trip Andrzej, 24, gives us a history of the city’s Jewish life. Andrzej says he decided to get his undergraduate and graduate degrees on Jewish studies because there’s always been a feeling of nostalgia in his home — his family was also displaced after the war — and “what’s more nostalgic than Jewish history?” he asks.

When Andrzej was 14 or 15 he found a postcard from Georgia at his grandparents’ house. He asked his grandmother about the postcard and she told him about a Jewish man his great-grandfather saved during the war. His great-grandparents had lived in Lviv, in front of a synagogue, and his great-grandfather’s best friend was Jewish. Before the war he’d left Lviv and took his best friend with him to hide in Bierutow. After the war the friends went their separate ways and Andrzej great-grandfather ended up getting displaced during the Soviet years. His friend, who’d moved to Georgia, had looked for him for years and finally found him. That’s why Andrzej discovered the postcard. 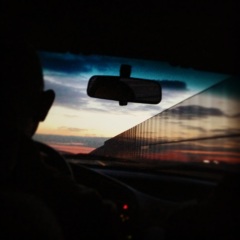 Sunset drive from Tarnobrzeg to Krakow.

Slawek, who comes to Tarnobrzeg with us, too, decided to get his degree in Jewish studies when he was in his 40s. His mother’s father hid a Jewish family in his basement during World War II.  Slawek never got a chance to ask his grandparents about their experience, but he knows they were recognized as Righteous Among the Nations by Yad Vashem.

Growing up Slawek had his own experiences with neighbors who were Jewish and  remembers going to Shabbat dinners without realizing what they were. His friends came over for Christmas dinner. Years later Slawek moved to Krakow and wandered through Jewish cemeteries. Memories arose and he decided he wanted to learn more. He remembers many of his Jewish friends who’d moved away in 1968 during a time of intense anti-semitism in Poland. He’s still in touch with an old buddy who moved to Israel. 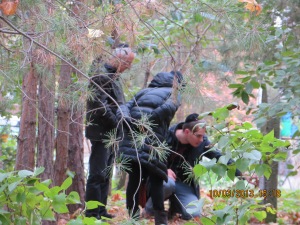 Slawek and Andrzej helping us read Hebrew on old headstones.

“Oy gevalt,” says Slawek when we realize the small holy construction, the Ohel, where a tzadik is buried, is locked.

Suddenly we hear an small old lady rushing toward us, “Mam klucz!” she says.

She has the key. 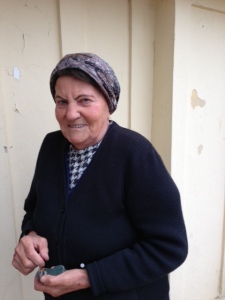 Irena tells us she lives in front of the cemetery and had been expecting us. Her husband had been the cemetery’s key keeper but when he died she’d been charged with the honor. She’d heard some Jews were coming by and was thrilled by the visit. Neither Irena nor her husband were ever paid for their service and she takes the responsibility very seriously. We wonder how long she’d been looking out her window waiting for us.

We arrive in Warsaw early the following day and Pawel walks us through some of the city. Pawel isn’t Jewish but teaches us how to imagine the old Jewish ghetto in Warsaw, tells us about Jewish heroes who survived, and those who didn’t.

He grew up in a time when nothing was talked about, he tells us. He’s passionate about this emerging Poland, a Poland that talks about its heritage — all of it. He shows us how Warsaw, a city that had been left in crumbles after the war, is creating thoughtful monuments and reminders throughout the city to remind citizens and visitors of what the city once was and of those who once lived here.

In Poland our surprises make us hopeful. We decide to stay here longer. 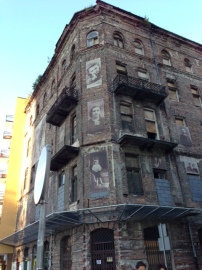 One of the many thoughtful memorials in Warsaw, remembering the Jews who once lived in this building.

2 Responses to “Poland Surprises. (In a Good Way.)”