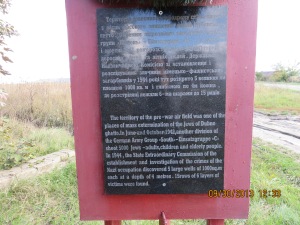 A memorial outside the old Dubno airport where 22 family members were murdered on May 27, 1942.

Today I travel to Dubno. We ride a car from Lviv, past the countryside, beetroot and potato plantations and forests. Before taking off, my grandfather gives me names to look for: his old school, his address growing up, the river he swam in during the summer and ice skated on during the winter.

After two hours in the car we arrive. We see the river, Ikva. It’s still there, the Dubno castle tower behind it, intact. It’s a warm day but there are no children playing outside. I imagine what it might’ve looked like as a young boy playing with his friends.

A horse carriage on a dirt road in Dubno: a common sight.

We drive to his old school, where my grandfather would walk to, about 3 or 4 kilometers, each day. He wasn’t a great student, he’d told me, but loved history, physics and geography. Math, not so much. The building, to our surprise, is still there. The outside is almost intact. But it’s an abandoned building. Weeds grow around the edges; windows are cracked. No one uses it anymore.

We find a woman, Ludmila, who studied in the same school as my grandfather. She was a year older, she tells us, and studied with an older class. Ludmila, who’s 89 or 90, has kind eyes and invites us inside her home, where she shows us photographs of her class. Unfortunately, she can’t remember my grandfather since he was a year younger. When we go back outside we see a horse cart on the dirt road carrying supplies, a common sight here. I imagine the old village doctor my grandfather had told me about, the only person in Dubno with a car back in the 1930s: “One time his car stopped and he got his gun and shot the engine,” he told me laughing.

Dead sunflower fields on the outskirts of Dubno.

We find my grandfather’s old street and look for the house where his family once had a garden and grew cucumbers, radishes and other vegetables. This street is paved now, but some houses look like they could still have a separate bathroom outside, some look like the walls are barely hanging on.

We go by the large Dubno synagogue, which is still standing in the center of town. Windows are boarded up and we see ruins on the inside through the cracks. A drunk man walks over to us and says something our guide refuses to translate. There are 20 Jews left in Dubno, our guide tells us. But no synagogues remain active today. 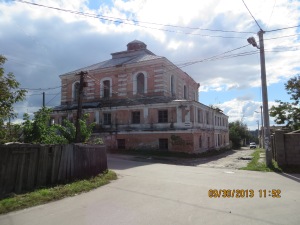 The remaining shell of the largest synagogue in Dubno.

When I told my grandfather I was coming to Dubno, his birth town, he first asked me why. There’s nothing to see, he said. Twenty-two members of our family were murdered, including his mother, Zysl, and his younger sister, Mania.

I wanted to see where he was born, how he managed to reinvent himself, recreate a life, thrive from ashes. I’m discovering that everything he left behind stayed more or less frozen in time, deteriorating.