We roll our bags into the train station, go through two security checks and find the fast train to St. Petersburg. Our train is scheduled to depart at 4:30pm and it does. Seats are comfortable and spacious, the ride is smoother than an airplane ride. I nod off watching the countryside.

We’re still in the light, tourist-y part of our trip, but I can’t help thinking about an 18-year old Jewish boy who took a train from a small town outside Moscow to Dubno, in the Ukraine. It was 1945, just a few months after World War II ended.

It had been four years since he’d left his home. In those four years he’d been a partisan, a decorated Red Army soldier and most recently he’d left a school for officials as a lieutenant. He’d gone hungry, had been wounded and tortured. He’d fought in the Belorussian front, he’d seen indescribable brutalities; he’d killed men. He knew his mother and sister were dead, but he’d heard his father was alive, and he was going to find him.

His train ride lasted a week, during which he sang patriotic Soviet songs with other wounded soldiers and found ways to dodge the military police since he had no documents to travel.

We, however, arrive in St Petersburg in roughly four hours. In the station we’re greeted by bright lights, a pleasant breeze and the city’s anthem. In a week, we will head to Dubno. The only thing I have in common with the 18-year old boy is I have no idea what I’ll find when we arrive. 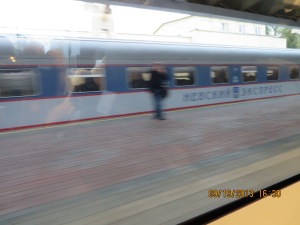 2 Responses to “Train Rides from Moscow”